Gail in the Round

It's not to often I make more than 1 of a pattern, let alone 3. But I have just finished my 3rd Gail pattern. But this one is not a shwl but a blanket/throw instead. I knit it in the round so essentally it's the pattern repeated 2x. To start it I cast on 8 stitches. Being that it was going to be a blanket I wanted the corners to be more stable than what the double YO provides so 4 of the cast on stitches were inserted to be between the YO's on what would be the center points of the shawl, the other 4 stitches cast on were to start the pattern. I worked the pattern chart every other row and did plain knit every other row. When it came to doing the edging I did plain stockinette and increased on either side of teh final leaf points by doing a after though YO (aka knitting into the running strand w/o twisting it) and worked those spaces as plain stockinette. the afterthought YO creates an open space but not as large of one as a regular YO woul give.

I did keep to the pattern for the corners and made those into points so that the blanket would be square on the corners. I finished up by doing 2 garter ridges and binding off.

If you are thinking you may want to knit a light weight throw conciser a shawl pattern in the round but knit in worsted yarn. This will be going to my Mom in Arizona so I didn't want a heavy blanket but still wanted to knit her something.

These photos are really poor quality, but you can get the idea of what I did. I used Bernat value yarn for this and about 4 skeins I believe.

Being that this is worked in worsted weight yarn it only took 3 pattern repeats to complete before adding the final repeat which contained the edging. 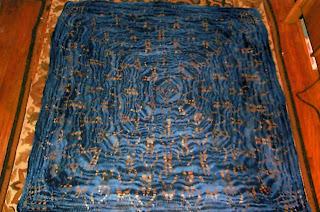 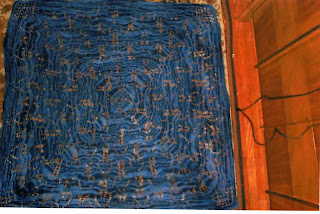 Posted by GsCraftsNthings at 10:37 AM