Last week I was called to Robert's (my middle child) school. He had an asthma attack but we didn't know he had asthma so nobody was prepared. I rode to the hospital with him in an ambulance where they kept him for several hours and still could not get his blood oxygen level to raise w/o him being on oxygen so they admitted him into the hospital and I stayed with him all Wed. night.

He is now doing great. They say it was intermittent asthma and was allergy induced. He's fine inside the house but has a rough go at it when he goes outside though he has been fine lately. I want to get him tested to see what it is he is allergic to. Michigan is a bad place to live if you have allergies. I have seasonal fall allergies and never had them till I moved to Arizona then came back to Michigan.

And then the other day Michael clogged our toilet (it's an old toilet and clogs easily). But he flushed and flushed and flushed till he jammed the valve into an open run. I was taking a nap before work and Anja came in saying it was raining in the basement... sure enough the whole bathroom, hall, entrance to the boys room and our bedroom was beginning to flood (or was well flooded already). The water was raining down through the floor into the basement! What a mess! Luckily it stayed on the side of the basement that didn't have the pool table but I had to shop vac the upstairs than shop vac the basement and everything is a sloppy mess!

WE have all hard wood floors which will need to be replaced and refinished as needed. But I don't intend to even think about that until the kidlets are older and out of the "oops I destroyed the house" stage. What would be worse than flooding our house is putting in new floors and THAN having it flooded.

So Now I'm cleaning the basement and everything that got wet. Well I have been putting it off for way to long so i guess this is my motivation.

Why does it seem we put things off and then it's 10x the hassle to clean when something happens?
Posted by GsCraftsNthings at 2:26 PM No comments: Links to this post

Email ThisBlogThis!Share to TwitterShare to FacebookShare to Pinterest
Labels: family

So we have had this stray kitty on our porch. I was feeding it to keep it near as I posted a found add on Craigs List and also a "seeking a good home" add.

Well, DH felt sorry for it as it was storming and let it in. It is really friendly with the kids and lets them pet him and pick him up. I went and got a litter pan and small bag of food but it looks as though we have a kitty now! He doesn't have fleas and is litter trained. I will take him to the vet down the road to see if he has a microchip in him and if not, he's good as ours.

Robert has decided on his own that the cat's name is Cookie. 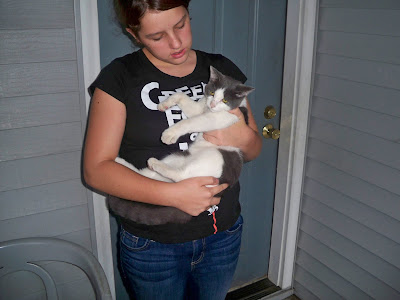 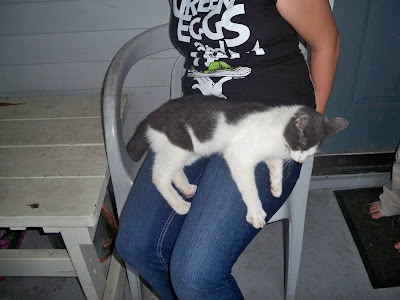 Posted by GsCraftsNthings at 2:22 PM 2 comments: Links to this post 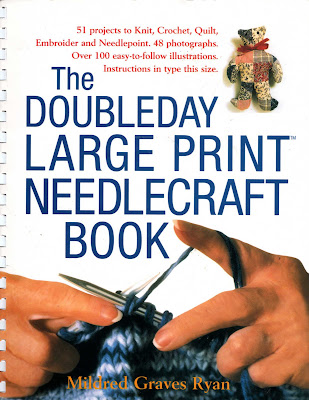 This is a great book with simple projects and is written for those with vision impairment. It contains many simple projects using common yarn weights, needle sizes and lighter colors. The projects in it are small and flat some times with some easy seaming to shape them.

Printed in large type so it's easier on the eyes this is a great book for anyone who's eyesight as started to slip, anyone seeking easy patterns to learn from with clear instructions and tips for making your own stuff.

You can get this book used at Amazon 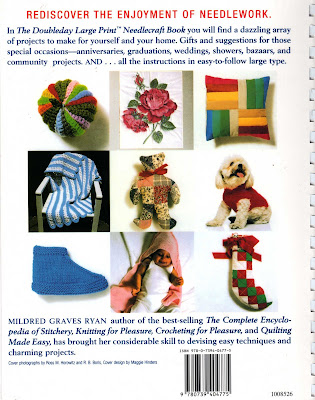 This is the ball I made for what I believe will be our new kitty. The pattern is in this book and it's crochet flat and then sewn into shape. My youngest also enjoys playing with the ball as it's so soft, light and squishy he can throw it in the house. A quick little project I had done in a hour or 2. 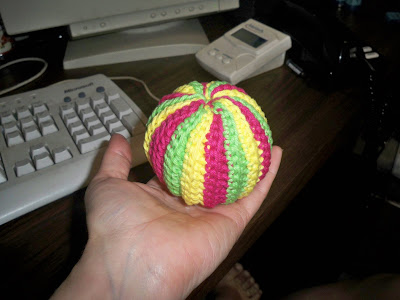 Posted by GsCraftsNthings at 2:02 PM No comments: Links to this post