Carl (our cat) has passed away

Not to long ago we aquired a stray cat that decided he was going to live at our house. I did a post when we "Got" him in the post We do(n't) have a new cat. Well Carl ended up getting sick as he was an indoor/outdoor cat (he made it clear it wasn't going to be any other way). We tried antibiotics and he got better but as soon as he was done with the antibiotics he got really bad really fast and was favoring his wounded leg again. He was a tough cat (or at least he thought he was). We (the kids and I) took him to the vet Sunday to see what was wrong.

Of course he didn't much enjoy the ride there.

After a blood test it came out that he had feline AIDS. We had to have him put down. He was a good cat for the short time we had him. The kids were there and got to pet him as he went. DD held him as they gave him the medicine to put him down.

He will be missed but we loved him while he was here. I'm glad the kids were able to be there when we let him go. The vet said we could bring him home but I figured he hated the ride there and wasn't going to get better so we thought it best to just make him stop hurting.

in memory of Carl the cat 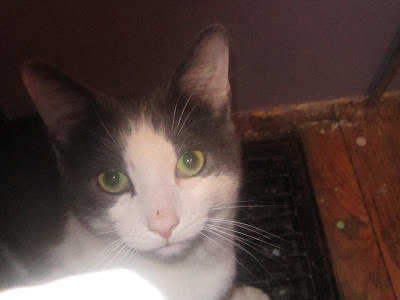 Posted by GsCraftsNthings at 2:32 PM 4 comments: