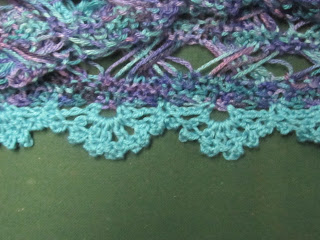 This is the edging I put on my Lapse of Reason moebius wrap. The wrap pattern is available for free on Ravelry .

I used an I hook, which is compatible to the size of the knitting needle I used.

This edging is worked over a distance of 9 stitches on the edge of what ever you are attaching it to.

Personally I do not worry about exact stitch count of the fo that I attach it to, I just follow the pattern and when I'm about 1/2 way to the end I figure out if I have enough stitches to complete the pattern. If I have a few to many stitches than the pattern calls for I'll just skip a total of 4 here and there when working the edging to make it come out correct. Or if I don't have enough I'll just skip 2 instead of 3 stitches on the edge a couple times spread out so it evens up.

For the edging I attached my 2nd color at any stitch. 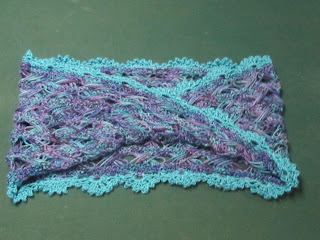 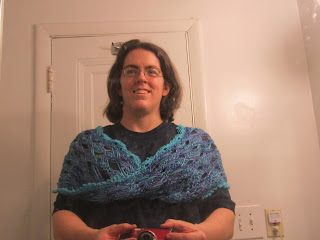 April is national autism awareness month. This is a issue dear to me yet something
Ii don't think I have posted about on my blog.

Both of my boys are on the autism spectrum. They are high functioning and doing great! We caught it early with both our boys and started them in special education programs very young. It been challenging but worth it.

Both boys exhibit different signs of autism. My older one is incredibly social and will make friends any time he sees a kid around his age. But when he was about 2 we watched him regress. He was learning to talk and everything but he stooped talking and he regressed to screaming and reaching out to let us know he needed/wanted something. It took a long time before he ever called me mom. He now struggles with his reading and math and will be repeating 2nd grade. He has an amazing vocabulary and a good working knowledge of math but when it comes to putting it on paper he struggles.

My youngest never regressed but also never quite advanced at a normal pace. Although he knew his full alphabet by sight (not in recited order) well before he was 3 he is shy. He has some speach delays as well. He will give sideways eye contact and he walks on his tip toes. He is above his class in many areas and will be moving onto 1st grade this coming year.

Things I have had people ask me...

"Can they fix it him?" - Well, 1st off, they are not broken and do not need to be "fixed" they are who they are and it's about how the brain is "wired" and not anything that went wrong or can be fixed.

"If they can't fix it, why don't you see more adults with autism?" - You do, you just don't know it. Autism is something you are born with and not something you catch. An adult who has autism has also had a lifetime to figure out a way to function in the world so you likely would not recognize the symptoms. It's not that they got over it, but more a matter of they learned to cope with it.

"But he doesn't look like he can't talk." - Yes, I had someone tell me this when sharing a photo of my kids. Yes they are normal looking boys and they are normal boys but they just have their quirks. Autism doesn't always have physical tell tail signs that something is a bit off.

So Autism speaks! let the world know you are willing to listen.

I did set up a fundraising page on the Autism Speaks website. I am not campaigning but put up a page because every little bit helps.
Posted by GsCraftsNthings at 6:06 AM 1 comment: